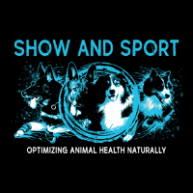 Firecreek Australian Shepherds welcomes you to our website archiving over 40 years of our kennel history. We were located in the High Desert of Southern California and produced highly competitive show and performance dogs from 1977 to 2017. We bred for healthy, athletic, intelligent dogs that conformed to the ASCA breed standard and provided many years of companionship for us and others.

We said goodbye to our last Australian Shepherd  Grace at age 14 in December of 2017. This was a difficult loss as it symbolized the end of an era and the last dog bred by Firecreek. We currently do not have Australian Shepherd and have moved our focus to working line German Shepherds for competition. Our current canine members are listed on our GSD page. 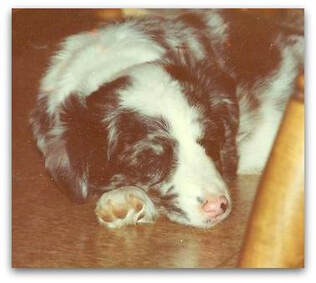 Tilly was our first Australian Shepherd, gift for my ex-husbands birthday.  Her intelligence, loving and loyal personality was the reason I became an Aussie addict. 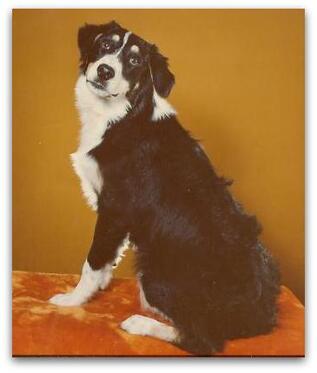 Bear was our first titled Aussie. As a youngster, he received a number of BOB puppy wins. Bear patiently allowed me to sharpen my handling skills, introduced me to obedience competition and as my partner we took several Best Adult Handler awards. 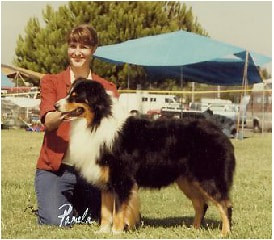 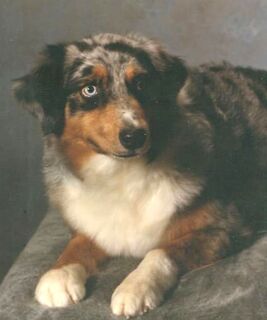 Cookie became our second champion as she and Mork completed their championships on the same day at the same show with the same handler! Multiple BOB winner, ASC So Cal Silver Specialty WB/BOW. Dam of champion offspring including Ch. Winchester's Rollin Rapids. 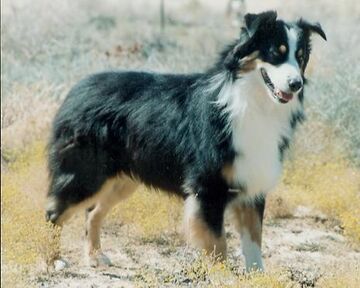 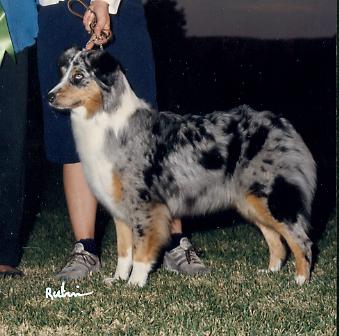 Amy was a multiple BOB/BOS winner,  ASC SoCal Silver Specialty winner BOS 3 years in a row, ASCA National Specialty pre-show BOS two days running and runner up to BOS at the Nationals. Amy defeated over 1500 Australian Shepherds in a single show season at ASCA only sanctions shows. This lovely "special" gal won in coat, out of coat and with any handler. Photo by Eddie Rubin.
​ 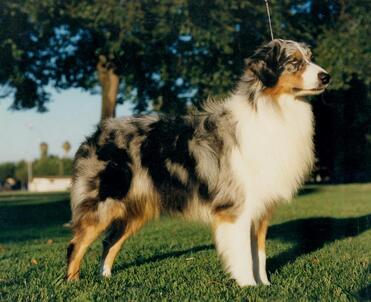 Art Blackford ( Winchester Kennels), picked Rollin out of our litter for a stud fee. Rollin returned to us when Art became terminally ill, requesting only that I finish his championship, and we fulfilled our promise. Rollin was WD/BOW at the ASC So Cal Silver Specialty a BOB winner and sire of obedience, champion and HOF producing offspring. ​ 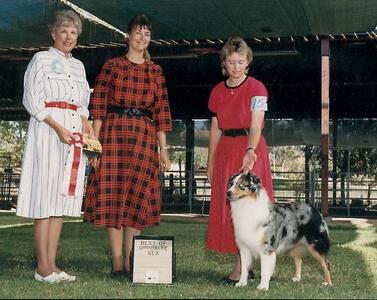 Spring came to us along with her sire from Winchester Kennels when her owner became terminally ill. She started her career with a RWD at six months of age and  went on with numerous BOB and BOB wins. She was patient with my daughter as she learned to handle, WCASA high point winner, Pre-National  Premier Champion and ranked in the top ten with ASCA.  Dam of champion and agility titled offspring. ​ 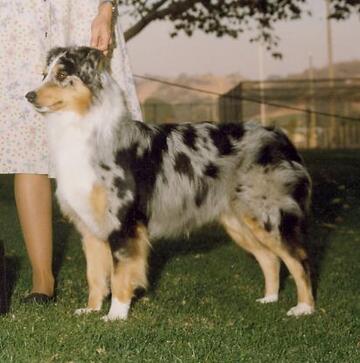 Tinker rapidly completed her championship and with numerous BOB/BOS wins was  ranked in the top 20  standings for ASCA within several months. She was elegant, and possessed a fluid ground covering gait. Tinker  is the dam of champion and agility titled offspring.  ​ 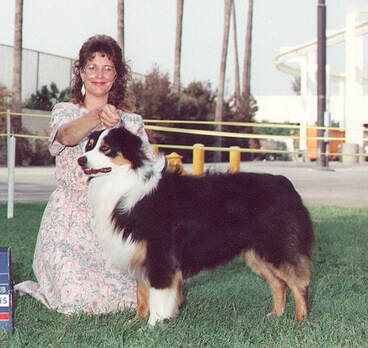 A true kind and gentleman of a dog. Multiple BOB winner at well attended AKC and ASCA events from Arizona Silver Specialty Best Puppy to So Cal Silver Specialty BOB, Pre-National Specialty Premier Champion. Sire of agility and obedience titled offspring. We lost Thunder in February of 2002 at the age of 12 1/2 years.​ 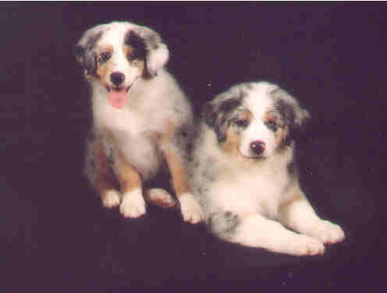 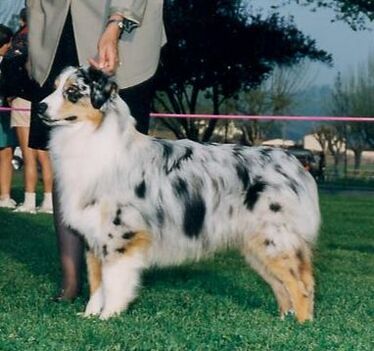 An elegant and fun dog with a flowing, ground covering gait. Dale won multiple National classes and easily completed his ASCA Championship, handled for his final points by my daughter Megan. 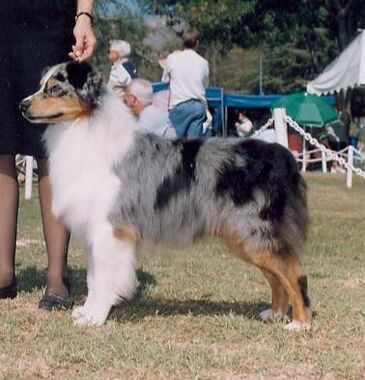 A sweet and gentle dog with multiple BOB wins at well attended ASCA and AKC events, junior handling dog. Sire of champion and agility titled offspring.  Chip crossed over the bridge in September 2007, we miss you Chipper. 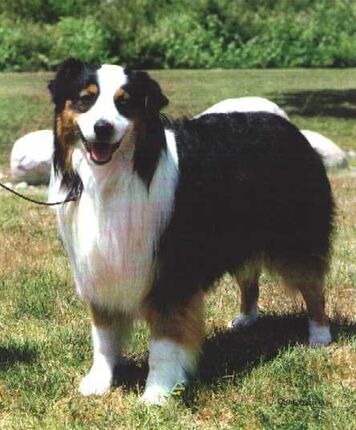 Otto was a dog with a wonderful sense of humor and possibly the most intelligent dog I have ever owned. He was a multiple BOB and BOS winner at major AKC and ASCA events, Southern Cal Silver Specialty BOB winner, adult and  junior handling dog. ASCA Hall of Fame sire. Sire of champion, agility and obedience titled offspring. Otto's get are also talented and successfully competed in conformation, agility, obedience, herding and many more disciplines. Otto crossed over the Rainbow Bridge on March 6, 2007 at nearly 16 years of age. 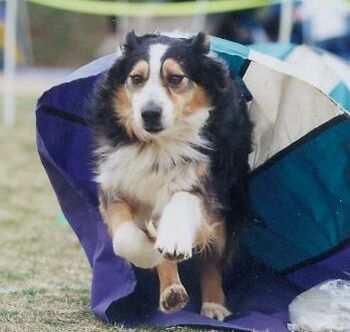 Buddy started his competitive career with a BOB puppy win. However, he much preferred agility to the breed ring. Buddy completed multiple agility titles in ASCA, NADAC, AKC and USDAA. He earned High in Trial agility awards including the 1996 ASCA Nationals. He was retired one jumpers leg short of his ATCH/NATCH titles. Buddy passed over the bridge on April 8, 2005, we miss him dearly. ​ 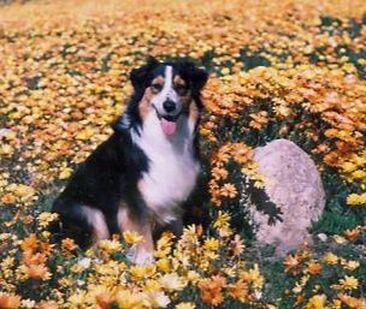 My heart dog with an old soul and adored by many. Ethel earned multiple agility titles in ASCA, NADAC, AKC and USDAA and year end standings and awards with AKC and WCASA. She qualified for the USDAA Grand Prix and the ASCA agility finals on multiple occasions. Ethel also enjoyed an occasional outing of herding or tracking, shown in altered conformation for the first time at age 8 taking WB, though she much preferred agility competition.

Ethel crossed over the bridge in October 2007. She was my heart and sole and is missed by many who loved her. 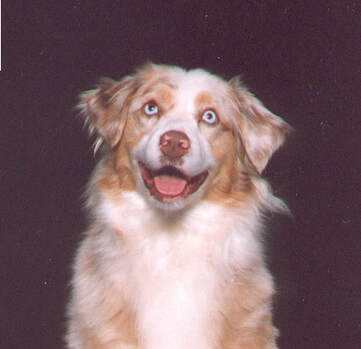 Cherri came to us from Jubilee Australian Shepherds. She was one happy dog that has never met a stranger and was adored by my granddaughter Alayna. She gave her all in competition leaving me in the dust on many occasions until arthritis terminated her agility career. Cherri was consistently in the ribbons, a USDAA Grand Prix qualifier in 2001, Top 10 (5th place) Novice B 20" USASA 1998 and Top 10 (2nd place) Open 20" Standard  USASA in 2000. Cherri crossed over the bridge in January 2010 we miss you sweet girl.  Photo by Tien Tran. 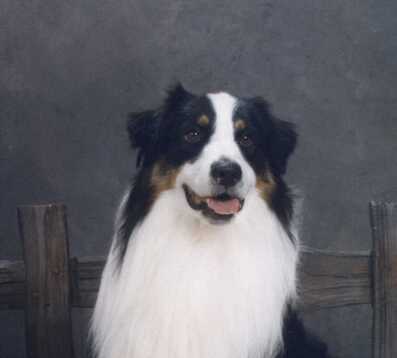 Intelligent, animated and willing to learn. Blast earned his International Champion in one weekend with several group wins. He was a consistent AKC Bred By Group winner, AKC major pointed and enjoyed training in rally obedience, tracking and herding. Blast's lack of titles is only due to my lack of competing with him. His accomplishments include: 2005 USASA Standings 2nd Place Rally Novice A with an accumulative score of 301
Blast crossed over the bridge in September 2010. We miss our handsome boy. 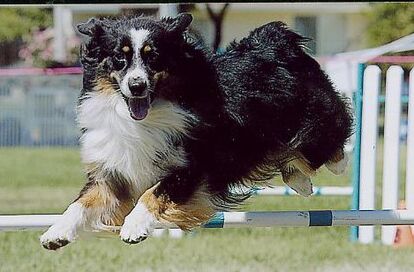 Po was a small, timid and athletic bitch with a kind and gentle soul that far exceeded our expectations in agility. Po passed away in June of 2012 at the age of 14. Sweet dreams little Po. 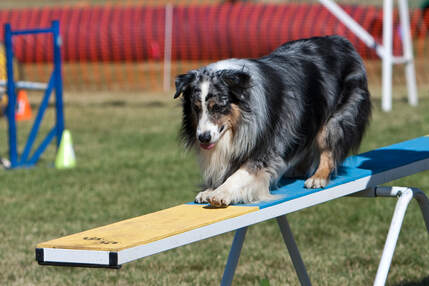 Litter mate to Grace and an athletic and silly boy. Even when he retired from competition, Flash enjoyed being a demo dog and running agility courses with my junior handlers. He loved to do Barn Hunt but never got to compete as we lost Flash suddenly in January 2016 to Hemangiosarcoma. RIP sweet boy. 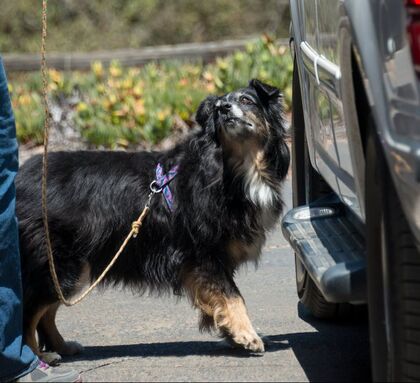 Little but a spitfire and a great watch dog. Grace successfully competed in Rally Obedience, Agility and K9 Nose Work. She retired from competition and lived out the rest of her life as my constant companion. She affectionately was known as my shadow. We lost Grace at the age of 14 in December 2017. She was the last dog from our Firecreek Kennel and the last Aussie in our household. Her passing is the end of an era and left a huge hole in our hearts. 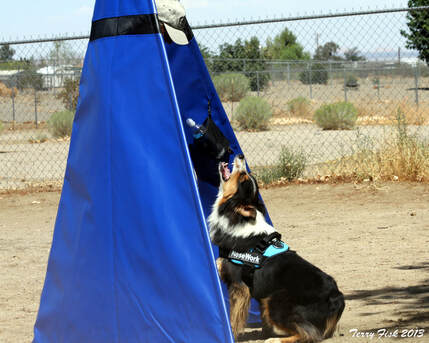 Grandson to Otto and nephew of Flash and Grace. Cooper came to us from Showdown Australian Shepherds. Cooper was enthusiastic, energetic and successfully competed in K9 Nose Work, Barn Hunt, Agility, Rally Obedience and trained for tracking, herding and Schutzhund. He was such a talented dog with a zest for life. We lost Cooper Labor Day 2017 at the age of six to Epilepsy. He fought a good fight for over three years, had a huge energy and presence and left a huge void in our lives. Please consider donating to Toby's Foundation
Search Engine Submission - AddMe